Corona Virus
©Photo byCharles Robertson
When I visited my local supermarket the other day, I was shocked to see that many of the shelves were empty. In all my thirty or so years of shopping here, I have never seen such a thing. I asked the Manager, if he thought that people had been panic buying and he said, with a solemn shake of the head, "Yes, it is very disappointing. I think people are just frightened..."
...

For some reason, this reply seemed somewhat surprising. People tend to be frightened about things that they don’t understand. Fear is an irrational response, to an often rational event. Nothing happens by accident and the corona virus, is no exception.

To some extent, this kind of behavior is a reflection on how we got to this point. Homo Sapiens has spent the last 200 years, since the start of the Industrial Revolution, ravaging this planet and consuming its resources?

However, panic buying is not happening, to the extent that the press, would have us believe. The empty shelves are a result of households simply using one or two more rolls each week.This is a consequence of people not going to work and using the toilet paper in the office or work place. But, why can't supply cope with this kind of increase in demand? The problem lies in the fact that many super markets rely on JIT [ Just In Time ] supply chains, which are finely tuned to a particular level of demand. Any slight change in the demand can cause chaos, especially when the network is a global one. Maybe, after this crisis has finished, countries should think about setting up national supply chains that emanate from home grown manufacturing sources.

Ironically, all of this was foretold in a Netflix documentary, called Pandemic, about 12 months ago. It predicted our current situation, in minute detail. It’s closing statement was, "A global pandemic is not a question of 'if’, but 'when’..."

Things have now got very bad, very quickly in the UK, concerning this virus. And, the rapid escalation of this issue, has, in part, been bought about by a Government that has dithered and prevaricated. Like most of the other nations that have been affected by the virus, the UK has been slow to act and has communicated its intent to the electorate, in a somewhat confusing manner.

But the coup de gras, is that fundamentally, the Government has adopted the wrong approach, after, initially, following the correct advice. 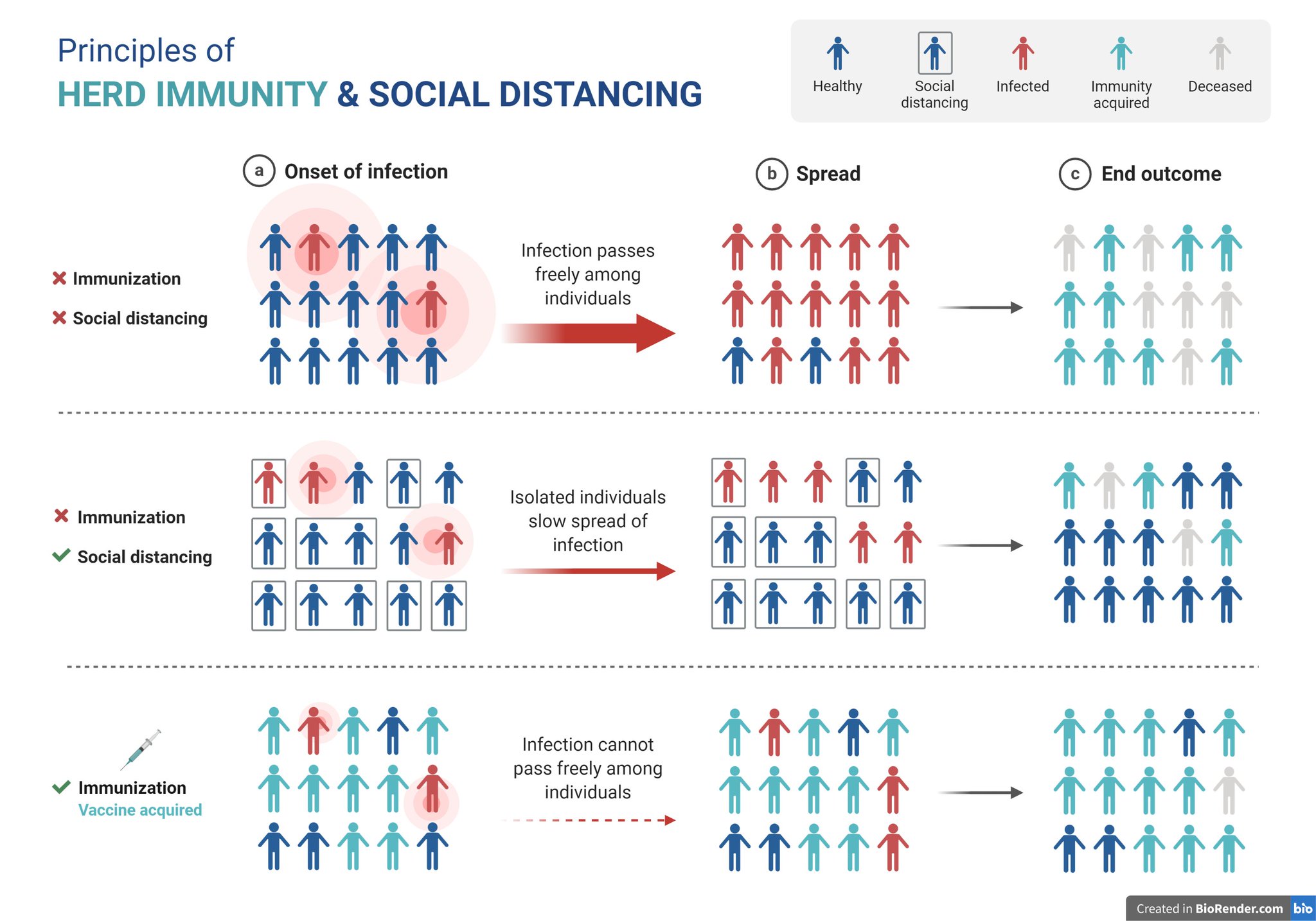 UK Prime Minister, Boris Johnson should have stood firm when he was advised by the Chief Science Adviser, Sir Patrick Vallance, that the UK should build up some form of Herd Immunity. We would have been the first country to buck a trend and it would have provided a dual stream approach, on a global level. Other countries might have had the courage to follow the same strategy, if Britain had taken the lead. After the pandemic is over, we could have compared the results of the Partial Self Isolation approach over the Full Self Isolation approach. However, unfortunately, our Prime Minister was lured into changing his mind, by a group of scientists, who wanted to play it safe, by going down the Full Self Isolation route.

But let me expand a little on why, I think the Partial Self Isolation approach is the correct one.

First of all, with this approach, only the elderly, sick & vulnerable, should be isolated.

Healthy/younger individuals should carry on as normal. This would allow immunity to spread throughout the very people who would be able to help those that are isolated. Protective measures would have to be taken, when the two population streams mix, but we have the capability of supplying those in the social care/medical sector, with the correct equipment to carry out their job safely. Those who catch the flu within the healthy population will then self isolate at home. This is what would have happened, with any other strain of influenza. Hospitals would not become inundated, because the virus would only circulate in the healthy layer of society. Sending the able bodied back to work, would not only allow our economy to keep functioning, but it would also remove the pressure on the benefits system. The money saved, in terms of universal credit receipts, could be diverted back into protecting the elderly.

Now, let’s look at what is actually happening in the UK.

All our schools have been closed and the hospitality/tourism industry has been shut down. These industries are supplied by thousands of satellite companies, which will probably go bankrupt. Although the Chancelor, is trying to mitigate this wave of bankruptcies, by offering grants to keep employees on the payroll, I do believe that this is just a smokescreen. The end result will not just be an economic recession, but a depression. Essentially, UK PLC will go bust. And the result of this economic Armageddon, will be a nation of people without hope. How many people will die from the poverty caused by the strategy of Full Self Isolation, as opposed to the one percent, who will die from the virus.

It is the end result of our current strategy that has not been thought through properly. And what is worse, is that there may not be any actual end. Because no one in the population will have acquired any immunity, it is likely that the virus will re-emerge, once people venture back to work? And how long do we actually think people will be able to tolerate this period of self isolation? It has only been a couple of weeks, and the cracks are beginning to show.

Imagine what will happen when thousands of businesses go bankrupt and millions of self employed people join the benefits system. This country is essentially going to implode. There could be a possible run on the banks. And then there is the possibility of civil unrest. At this point, the original policy of Full Self Isolation, will be in tatters, anyway.

In short, this policy of Full Self Isolation will be disastrous. The Government must reverse this ideology and tell people to go back to work. Schools should be re-opened and the hospitality industry must be resurrected, immediately. Certain outdoor sporting events should be re-instated, like Wimbledon, The Masters, the Premier League Football, the F1 Season and, of course, the Olympics in Japan. After all, sport is what keeps a nation’s level of hope & aspiration alive. Flu has a limited spread factor, outdoors and, if these gatherings are only attended by fit & healthy individuals, then we should be able to keep the spread of infection to a minimum.

Now, let’s take a look at the historical aspect of influenza.

Firstly, let’s start with the Spanish Flu in 1918. World wide, 500 million people were infected, which at the time, equates to nearly a quarter of the world’s population. More recently, in 2009, the Swine Flu, infected 25 million people across 43 countries. 500,000 died of Swine Flu.

During the Swine Flu pandemic, a policy of self isolation, was not implemented. So, why was this? The next example might shine some light on a possible answer. There were an estimated 30,000 [ 26,000 in England ] deaths in the UK, in 2017/18, from seasonal influenza. Now, considering, the influenza season, lasts for just 12 weeks, that means that 10,000 people died from influenza, each month, during the 2017 - 2018 season. So far, Corona Virus has killed 9,000 within a month. I cannot remember, any news reports related to influenza related deaths during the 2017 - 2018 season. This begs the question, why has the World Health Organisation [ WHO ], in general, reacted in such an extreme way towards the Corona Virus. Part of the answer, lies in the psychological effect that not having a vaccine, has had in shaping WHO policy. However, if we look at the UK influenza outbreak in 2017, it was widely accepted that the flu vaccine failed. In a sense, what is happening with the Corona Virus and what happened in the UK, in 2017 with the H3N2 strain, are fairly comparable. The difference is, that in 2017, the British Government did not introduce a policy of self isolation. There are many different reasons for this, but the Government’s faith in a tried & tested solution, like a seasonal flu vaccine, must have been a front runner. 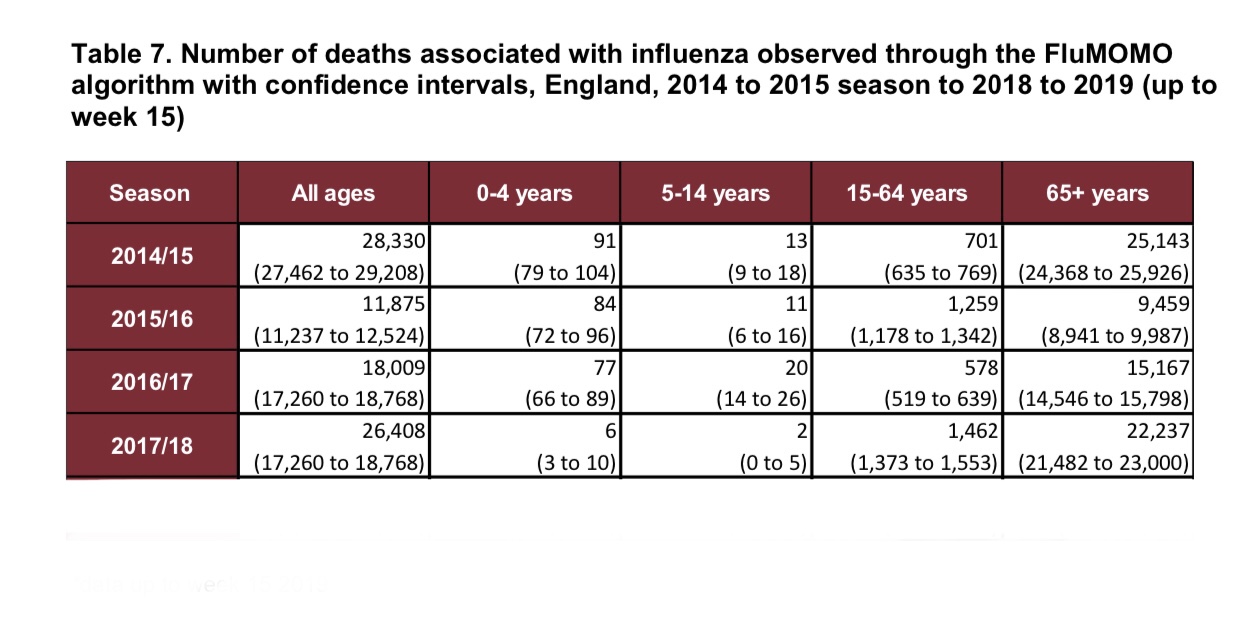 Let’s be clear. This is influenza, not Ebola. One percent of those who catch this virus will die. Ebola will kill 75% of those that it infects. There is a vast difference. I believe we can build up Herd Immunity without adversely affecting the elderly or the vulnerable.

Yes. We must isolate the elderly & infirmed, but the rest of the population must carry on as normal. It seems that the majority of Governments around the world have been blindly following each other. Those Governments that have acted independently, have tended to profit from thinking outside the box. South Korea, Singapore and Germany, have used a strategy that mainly revolves around testing & tracking. So far, this approach seems to be saving lives. Other Governments seem paralyzed and have resorted to a combination of several, sometimes, conflicting strategies. Once, this pandemic is over, we will be able to calmly analyze the statistics and work out, which approach, was the most successful. The UK Government's approach is just too blunt. If it had managed to order enough test kits and PPE equipment, it would have followed the strategy that the German Government has employed. But, alas, we were too slow off the mark. Our only choice was to go for Full Self Isolation or Partial Self Isolation.

We still have time to change this policy, but in a few weeks, it may be too late. The damage to our economy will be too far gone.

Britain & the rest of the world need to stop sleep walking into a disaster of catastrophic proportions, by following this misguided strategy of Full Self Isolation.

Experts that are currently advising Governments, around the world, are providing a variety of opinions. But I would like to leave you with a quote by the famous biologist, Professor Nei Masatoshi:

"You have to question dogma. Use common sense. You have to think for yourself, without preconceptions. That is what’s important in science."

Deletion is permanent.
Do you still wish to delete this blog?

Deletion is permanent.
Do you still wish to delete this user?

This comment has been rejected because it contains a profanity

Deletion is permanent.
Do you still wish to delete this comment?

Deletion is permanent.
Do you still wish to delete this bookmark?

Deletion is permanent.
Do you still wish to delete this notification?